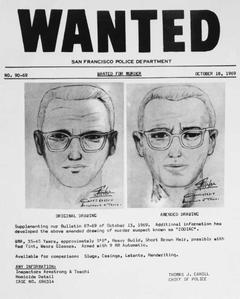 ​Jutting out from the west coast of England and directly across the Irish Sea from Ireland, lies the beautiful country of Wales with its vibrant green rolling pastures, mud flats teeming with birds, and rocky mountain peaks and coastline. And yes, Wales is a country, and not a principality of Britain, as the residents will proudly tell you.

Wales is a country, in its own right, but still part of Great Britain. Even with their own system of government and laws, in 1969, many of the Cymry or Welsh people felt that Britain had too much influence over their government and lives. From this sentiment there arose a new nationalist movement arguing that Wales could not truly be free if they had to live by laws set down by Britain. Things came to a head on July 1, 1969.

In 1951, the Mau Mau, under the leadership of Jomo Kenyatta, began what become known as the Mau Mau Rebellion in which its members would use guerilla warfare tactics against European landowners throughout the country to forcibly demonstrate their opposition to Britain. By the end of 1952, the British government had declared a state of emergency and Kenyatta and five hundred of his rebels were arrested.

Mboya stepped in as the treasurer of Kenyatta’s KAU, thus assuming the role as the new head of the movement. Almost immediately, Mboya unified and mobilized five of the strongest Kenyan labor unions to form the Kenya Federation of Labor (KFL) to protest and demonstrate their strength and determination against the Commonwealth 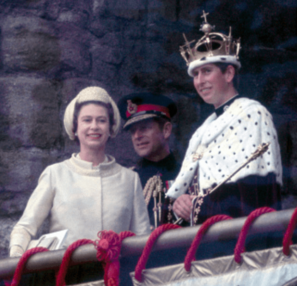 Everyone's Gone to the Moon

The Royal lineage to be the Queen or King of England can be difficult to understand for those of us across the pond, what with dukes, duchesses, princes and princesses galore. One title, however, is quite well known around the world - the Prince of Wales. But how Prince Charles received the title is a rather winding road.

​Upon his mother’s ascension as the Sovereign Queen of England, Prince Charles automatically became the Duke of Cornwall. In 1958, Charles became the Prince of Wales and Earl of Chester when the Queen issued a declaration known as Letters of Patent. These are official legal documents used to bestow titles on members of the Royal Family. It wasn’t until 1969, however, that the actual investiture ceremony to bestow the title on Charles was announced. It would be held at Caernarfon Castle in Wales.

Meanwhile in the country of Kenya, on the continent of Africa, the man that

most people expected to be the nation’s second president, the successor

to Jomo Kenyatta, Tom Mbyoa, was assassinated on the fifth day of July 1969.

Mboya was born in 1930, the son of a poor Kenyan farm family. He was educated at several Catholic missionary schools before he set off for Nairobi where he enrolled in a sanitary inspector’s school. Upon graduation in 1950, he was offered a job as an inspector in Nairobi. While in the position, Mboya quickly began his rise in politics and in fifteen short years grew to be one of the most influential activists and politicians in pre-independent Kenya.

In the early 1950s, Kenya was a principality of Britain and, as was the case in Wales, a Kenyan nationalist movement began to rise. The goal of the movement, known officially as the Kenya African Union (KAU) and informally as Mau Mau, was to oppose British rule by using any means at their disposal. The movement consisted primarily of members of the nation’s largest tribe, the Kikuyu.

The British Labour Party arranged for Mboya to attend a year of college at Oxford University where he studied industrial management, but by the time he returned to his home country in 1960, the rebellion had been effectively dissolved. Over ten thousand of the Mau Mau had been killed and Kenyatta remained jailed in a Kenyan prison. One of Mboya’s first duties upon his return was to campaign for Kenyatta’s release which was granted in 1961.

Two years later in 1963, Kenya was granted independence within the Commonwealth which simply meant that Queen Elizabeth II was still the head of state over the country. The following year, however, Kenya was declared a sovereign country in its own right with Kenyatta being installed as the new president and Mboya the new Minister for Justice and Constitutional Affairs. Later Mboya became the Minister for Economic Planning and Development where he laid the groundwork for bolstering the Kenyan economy and the footing that would ensure a strong mixed-economy in the country’s future.

One of the bombs detonated pre-maturely and two of the MAC men, 22-year old George Taylor and 37-year old Alwyn Jones, were killed instantly. No damage or harm came to the railway or Royal Family and the investiture was held as planned on July 1st. But many questions remained - what was the bombers intent? Were the public works facilities really the target as suspected, or did they actually plan to kill the Royal Family?

In the years after the bombing, the third member of the group, the mastermind and head of MAC, John Barnard Jenkins, insisted that MAC did not intend to kill the Royals. In a 2014 interview with WalesOnline, Jenkins explained, “What we were trying to do was let people see the seriousness of the situation and how Wales would get nowhere while decisions were [being] made in London. We never intended to hurt anyone, and I still feel guilty about what happened to the two guys at Abergele. I feel that I should have been killed.”

Despite Mageau’s description of the killer and fingerprints lifted from the scene, no one was ever brought to justice for the crime. The Zodiac was linked to at least three more murders, all of which were followed with the same taunting letters and phone calls.

The last murder linked to the Zodiac occurred in 1974, the same year that his letters ceased. In all, the killer has been linked to five murders, is a suspect in several more, but was never caught.

stock markets were welcoming a newcomer, one that

would continue to play a major role in the markets we

​TOPIX is considered by many investors to be the best

representation of all the Japanese stock markets. The

trading on the Tokyo Stock Exchange and reflects their

price changes. The Index uses data that was recorded

for those companies on January 4th, 1968, as a base to determine the current market capitalization. From that baseline, the Index can determine the overall trend in the stock market. The 1968 base data is still used today.

The artistic world was saddened the first week of July 1969 when news was received that two celebrated artists had died. The first, Erwin Blumenfeld, was a man who was known as one of the most influential and innovative photographers of the 20th century. Blumenfeld was best known for his work in the fashion industry from the early 1940s to late 1950s. He achieved fame for his portrait work, collages, and drawings which were in Dada style, a European avant-garde art form of the early 20th century that was both satirical and nonsensical.

Through the years, Blumenfeld pioneered and refined the use of double exposures, veils, and photograph sandwich printing. He was seventy-two when he died.

The second was pianist Wilhelm Backhaus.  Born in Leipzig, Germany, in 1884, Backhaus began playing piano at a very early age, performing his first concert at the age of eight. In 1905, he won the coveted Rubenstein Prize for music in Paris. He is best known for his interpretations of the works of Ludwig von Beethoven which appeared on several albums beginning in 1939 on the Electrola Records and German Gramophone labels. Backhaus died on July, 5th at the age of eighty-five.

It was assumed that the formal occasion would be uneventful and routine. In fact, the event coordinator, the Earl of Snowdon, Antony Charles Robert Armstrong-Jones, Constable of Caernarfon Castle, said publically that he “couldn’t imagine that there were many people against it”, but in truth, the ceremony was fiercely opposed by several Welsh nationalist groups including the Free Wales Army who vowed to wage a campaign of civil disobedience. The group agreed that just prior to the ceremony, they would set off bombs and destroy several strategic properties in protest of British rule.

On June 30, the evening before the investiture ceremony, three members of the Mudied Amddiffyn Cymru (MAC) – Alwyn Jones, George Taylor, and John Jenkins - planted a series of bombs that would disrupt a flow of water from facilities that pumped fresh water to Britain from Wales. There was only one problem - the facilities they were to target were located near the railway line at Abergele, the route the Royal Family would travel get to the investiture ceremony. 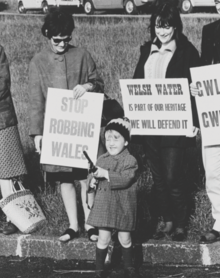 It was more than obvious to many that Kenyatta was setting the stage for Mboya to take his place as president after all, Mboya did keep the movement going while Kenyatta was in prison and he had secured Kenyatta’s release. In 1968, Mboya began accusing several Kikuyu politicians of enriching themselves off the backs of their fellow countrymen. The situation became a powder keg and on July 5th, 1969, as thirty-eight-year old Tom Mboya walked out of a drugstore, a gunman, Nahashon Isaac Njenga Njoroge, assassinated the political superstar. Thousands of angered people poured into the streets to display their outrage. Njoroge was later hanged at Kenya’s Kamiti Prison for the crime. 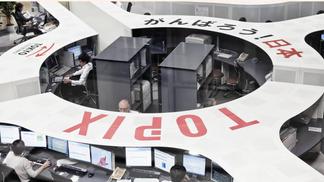 At his funeral, Kenyatta said of Mboya, “Kenya’s independence would have been seriously

compromised were it not for the courage and steadfastness of Tom Mboya.”

In her book, The Other Barack: The Bold and Reckless Life of President Obama’s Father, Sally Jacobs reveals that Barack Obama Sr., the father of the future Forty-fourth President of the United States, was with Mboya the day of the assassination. According to her account, Obama joked with Mboya that he had parked the car incorrectly in front of Channi’s Pharmacy and that Mboya might get a ticket. Obama Sr. was the final prosecution witness in Njenga’s trial.

One of the most famous serial killers of the 60s, the Zodiac

Killer, committed his second murder the first week of July 1969,

seven months after his first confessed killing. That first murder

occurred in December, 1968 along on a remote road in Vallejo,

California. The bodies of 17-year old David Faraday and his 16-year

old girlfriend, Betty Lou Jenkins were found shot to death in their car.

Not long after the bodies were found, the Zodiac began taunting

police, daring them to catch him.

began, “Dear Editor: I am the killer of the two teenagers last

Christmas at Lake Herman.” The letter contained details from the

murder scene that only the true killer would have known. The letter

closed with what became the Zodiac’s trademark symbol - a circle

with a cross in it, and a cryptogram or cipher that allegedly contained his identity.

Early on the morning of July 5th, 1969, twenty-two-year-old Darlene Ferrin and her boyfriend, nineteen-year-old Mike Mageau, were parked as young lovers do on a dark road in Vallejo. A man approached the car with a flashlight and fired multiple shots through the window of the car killing Ferrin and severely injuring Mageau. Within an hour of the shooting, a man contacted the Vallejo Police Department to report the crime and to announce that he was the killer. He also proclaimed that he was the killer of Faraday and Jenkins the previous year. 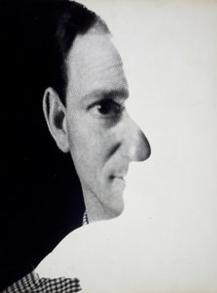